William Bligh’s log and journal of HMS Bounty held by the State Library of New South Wales documents a voyage that included the most notorious mutiny in maritime history and one of the great stories of human survival. It records Bligh’s incredible navigational feat after being cast adrift from his ship in April 1789 of sailing an open longboat with 18 men, no charts and limited food more than 6000 kilometres across the Pacific Ocean to safety in Timor. It is the only log and journal written during the voyage and throughout the mutiny and journey to Timor. The log entries are a record of the voyage and chronicle Bligh’s relationship with mutineer Fletcher Christian.

Bligh’s account of the mutineers provides a record of the people who went on to become some of the earliest European settlers in the Pacific, firstly at Pitcairn Island and later at Norfolk Island. The log entries also document part of the early career of Bligh, who became a significant Australian colonial figure as the fourth Governor of New South Wales, taking office in 1806. The mutiny on the Bounty assumed even greater historical significance for New South Wales when Bligh was unlawfully deposed as Governor by yet another mutiny in 1808.

The mutiny on the Bounty assumed legendary status and has inspired a wide range of literature and artistic interpretations, cementing its place in popular culture worldwide.  Bligh’s log and journal has provided a substantial foundation for the legend, as well as for historical analysis.

More information about this listing is available here; 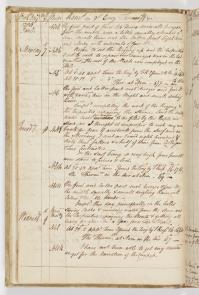 31 January 1788 in Volume 1 Log of the Proceedings of His Majesty’s Ship Bounty in a Voyage to the South Seas
More information about this listing is available here; Transcription