Australia lies within a region of great linguistic and cultural diversity. Over 2000 of the world's 6000 different languages are spoken in Australia, the South Pacific Islands (including around 900 languages in New Guinea alone) and Southeast Asia. Most of these 2000 languages and their associated cultural expressions (such as music and dance) are very poorly documented.

Australian researchers have been making unique and irreplaceable audiovisual recordings in the region since portable field recorders became available in the mid-twentieth century, yet until the establishment of PARADISEC there was no Australian repository for these invaluable research recordings. The collection was begun in 2003 when researchers recognised that many fieldwork recordings in Australia were not being cared for properly.  Several thousand hours of such recordings were identified and a consortium of three universities – the University of Melbourne, University of Sydney and the Australian National University – built the required mechanisms to borrow them, describe them, digitise them and curate the collection. A major goal has been to make field recordings available to those recorded and to their descendants.

Most of the collection has been digitised from analog recordings made by linguists, musicologists and other researchers going back to the 1960s. Some material dates from the late nineteenth century, particularly correspondence and notes held by eminent linguist the late Professor Arthur Capell, now digitised and available online.

The collection comprises 3700 hours of audio recordings, text files and images of manuscripts related to small languages and cultures from Australia and its region.  It is of historical and social significance as a witness of speech varieties and performance styles that are no longer practised, and for its preservation of endangered languages and cultural forms in Australia itself and in the region where its academic researchers have played significant roles. 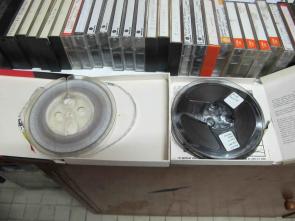