The Sydney Theatre Playbill of 1796

The Sydney Theatre Playbill of 1796, in the collection of the National Library of Australia, is the earliest surviving example of a document printed in the colony of New South Wales. It advertises three entertainments to be performed in the Sydney Theatre on 30 July, and was produced by printer George Henry Hughes on the first printing press in the new colony, a wooden screw press brought to Port Jackson by Governor Arthur Phillip but not used until 1795. The verso of the Playbill is annotated by Philip Gidley King, later the third Governor of New South Wales. The Playbill left Australia with King, and passed through a chain of owners until it became incorporated in a scrapbook in the collection of the National Library of Canada. The Canadian Prime Minister, Stephen Harper, in recognition of its significance for Australia, presented the document to Prime Minister John Howard on 11 September 2007. 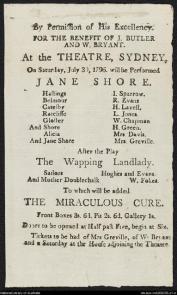