The Victorian Women’s Suffrage Petition of 1891 contains almost 30,000 signatures and addresses collected by members of the Women’s Christian Temperance Union, the Victorian Temperance Alliance and other women’s suffrage groups, demanding the right for women to vote in the colony of Victoria.

Presented in 1891 with the support of Premier James Munro, whose wife was one of the signatories, it was the largest petition to be tabled in the Parliament of Victoria in the 19th century.

Comprising many fabric-backed sheets of paper glued together and rolled onto a cardboard spindle, the ‘Monster Petition’ is approximately 260 metres long by 200 millimetres wide. It bears the statements ‘that government of the People, by the People and for the People should mean all the People, not half’, and ‘that all Adult Persons should have a voice in Making the Laws which they are required to obey’.

It is a visual legacy of the important efforts of grassroots Australian women’s movements and is representative of the development of Australia’s democracy. It was a catalyst for other Australian states’ women to lodge petitions in their respective parliaments; while South Australia’s suffrage petition was successful sooner than Victoria’s, none was as large as the Victorian petition.

In December 1894 the South Australian Parliament became the first in Australia, and only the second in the world, to extend the suffrage to women. The 1894 Petition was presented to Parliament on 23 August 1894, just as the third reading of the Constitution Amendment Bill, proposing to extend the suffrage to women, was being debated. It contained 11,600 signatures, two-thirds of them from women, and was the largest of several petitions presented on this matter.

The Petition was the work of a group of women’s organisations, the Women’s Suffrage League, the Woman’s Christian Temperance Union and the Working Women’s Trades Union, which gathered signatures from all over the colony, campaigning for the suffrage as they went.

The 1894 Petition was recognised at the time as a significant factor in securing the passage of the Constitution Amendment Act (1894/5) and can be regarded as an iconic document of the ‘first wave’ of the Australian feminist movement. 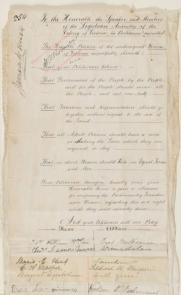 The front page of the Women's Suffrage Petition