The FE Williams Collection documents the life and work of anthropologist Francis Edgar Williams (1893 – 1943). Williams was assistant government anthropologist and government anthropologist in the Australian Territory of Papua, from 1922 until his death. Williams' collection – consisting of almost 2000 glass plate photographs and negatives – is dispersed between the National Archives of Australia, the South Australian Museum and the National Archives of Papua New Guinea. The collection is of outstanding significance for its depiction of Australia's administering role in Papua in the 1920s and 1930s.

The photographs of FE Williams are a rich and unique resource of great significance to the Asia-Pacific region, and this was recognised by their inscription on the UNESCO Memory of the World Asia-Pacific Register in 2012. They are multi-layered in meaning and significance: they are a record of first contact with a culture hardly known to the west at the time, they reveal the customs, behaviours and lives of their Papuan subjects, and they tell a larger story of the colonial milieu of Papua in the 1920s and 1930s.

Williams was a perceptive and painstaking ethnographer, with an 'unfailing instinct for the focal areas in a culture', according to Michael Young and Julia Clark in their book on FE Williams, Anthropologist in Papua.  The breadth and duration of Williams' work – covering almost 18 different ethnographic locations in a timespan of almost 20 years – make his photographs unique in their coverage of the inhabitants of Australia's largest former colony. 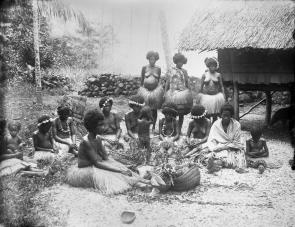 Girls and women at small soi or feast
More information about this listing is available here; National Archives of Australia