The Queensland South Sea Islander labour trade between 1863 and 1904 had substantial cultural, economic and political impact both within and outside Australia. The 62,000 indentured labour contracts secured a cheap workforce for the new colony’s developing primary industries, particularly sugar cane production.

Records of the Colonial Secretary’s office, Inspectors of Pacific Islanders in various towns and the immigration department, held in Queensland State Archives, form a comprehensive record of the administration of the South Sea Islander immigration and employment program from 1863 to 1908. They include important documentary material such as passenger lists, lists of labourers, registers of agreements and exemption from deportation, and correspondence, and provide valuable information on the people involved and on the close administration of the program.

These unique government records document the arrival, employment, and deportation or exemption from deportation of South Sea Islanders. As well as being significant for the Australian-born descendants of the original Islander generation, they are important in the context of Australian history, as the abolition of the South Sea Islander trade was a critical factor in the process of Australian Federation and in the development of the ‘White Australia’ policy. 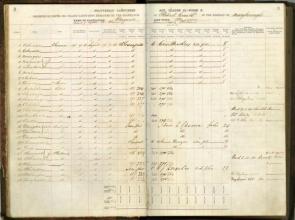