The Anzac mythology that underwrites the day of commemoration is central to popular notions of Australian origins and identity and represents our most powerful myth of nationhood. For many Australians, Anzac Day evokes deep and passionate responses.

This is the first minute book of the Anzac Day Commemoration Committee, comprising minutes, correspondence, notes and printed ephemera relating to the committee’s efforts to establish a national Anzac Day of commemoration. There are no comparable documents in official government or military archives. The content of the Anzac Day Commemoration Committee Minutes and Suggestions 1916-1922 reflects the debates about the suitable commemoration of Anzac, and the emergent view that there should be a solemn reflective space within and around the patriotic pageantry characterising wartime commemorations. Although there is some disagreement as to the pre-eminent role of this Queensland Committee in bringing about the national day of commemoration, there can be no doubt that its approach influenced much of what became Anzac Day.

Any archival sources about the commemoration’s origins are of major significance to historians and other researchers. They provide rich insights into the forces that shaped Anzac Day in the earliest years of its enactment, the ways it was imagined, refashioned and contested during this period. This book, held by the State Library of Queensland, enables scholars to better understand the actions and motivations of those who sought to establish and shape Anzac Day observance in Australia. 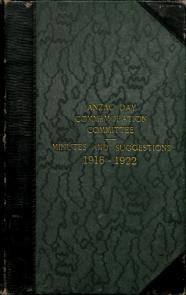