The Swan River Settlement had been in existence for 20 years when it took the unusual step of electing to become a British penal settlement in 1849. The British authorities accepted the offer and quickly dispatched the barque Scindian, which arrived in Gage Roads on 1 June 1850 with a cargo of 75 male convicts, the first of 43 shipments of convicts to the colony over an 18-year period. Although a total of 9925 convicts were officially transported to Western Australia, it is estimated that 500 of these were local prisoners intermixed with transported convicts.

Transportation of convicts to Western Australia ceased in 1868 as a result of a reassessment of British home policy, with the last convict ship to Australia, the Hougoumont, arriving in the Swan River Colony on 10 January 1868 with 229 convicts aboard. Convict labour continued to be used for some time following the end of transportation, relying on local prisoners and convicts serving the remainder of their sentences. At the time of the Hougoumont's arrival 3158 convicts remained under government control in Western Australia.

There are a considerable number of records relating to the convict system held by the State Records Office including those created by the Convict Establishment and the Colonial Secretary's Office, as well as the records of various local courthouses and police stations. The convict records of Western Australia, along with those of New South Wales and Tasmania, were inscribed on the UNESCO Memory of the World International Register in 2007 as The Convict Records of Australia. 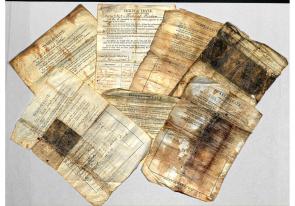