The James Tyson Papers held in the Deniliquin & District Historical Society, National Library of Australia, Queensland State Archives and the State Library of Queensland are of historical significance as the surviving records of the creator of one of Australia’s greatest pastoral empires and this country’s first millionaire, described as ‘a legend in his own lifetime’, and celebrated on his death by a poem by Banjo Paterson, 'T.Y.S.O.N.'

The James Tyson Papers are a unique record of pastoral expansion and the early establishment of business in regional Australia. While they can be compared to the records of the Australian Agricultural Company already on the Register, what distinguishes these records is that they were generated by the activity of an individual, rather than a large company. They provide valuable information on the operations of a pioneer of the pastoral industry in Australia, who was responsible for not only developing a vertically integrated business operation across three colonies, but also for creating valuable infrastructure in rural and regional Australia.

The records held in the Deniliquin & District Historical Society and the National Library of Australia comprise original material generated by Tyson and his business associates. The Deniliquin & District Historical Society’s collection of Tyson documents mostly derives from Tyson’s Heyfield property, which was under the management of C.W.G. Whittakers, though it includes a few letters to and from earlier managers. The National Library holds the papers relating to the case of McEvoy vs. Tyson, a dispute concerning the boundaries of their respective holdings and documents relating to claims to inheritance and to the administration of Tyson's estate, 1898-1907, and Tyson’s only surviving original diary from 1863-1864, the 'Heyfield diary'.

Some of the material held in the State Library of Queensland and Queensland State Archives consists of transcripts of Tyson’s diaries made in 1900 for the purpose of a legal action by the Queensland Government after Tyson's death. They are, nonetheless, the only surviving copies of the documents of which they are transcripts, so they are also significant on that account, as well as for their association with the legal action to establish the location in which Tyson’s vast estate should be liable for death duties. The State Library of Queensland holds correspondence, typescripts, newspaper cuttings and notes, some of them given to Tyson's biographer, Zita Denholm, by Tyson family members . 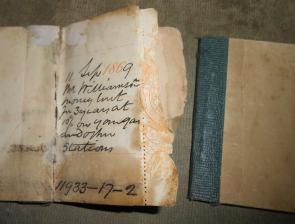