In June 1992 the High Court of Australia, in its judgement in the Mabo Case, overturned the doctrine of 'terra nullius', that Australia was an empty land owned by no one at the time of European colonisation. The judgment unleashed profound change in Australia's legal landscape, and influenced the status and land rights of its indigenous peoples and race relations in Australia generally. It is an extremely rare instance in world history of pre-existing customary law being recognised as superior to the law of the invading culture, regardless of the economic and political implications. The Mabo papers, dating from 1959-92, are significant for their documentation of a crucial period in the history of race relations in Australia, featuring a series of battles and legal cases over the ownership and use of land, growing awareness of racial discrimination, and the social and health problems of indigenous peoples. The issues discussed in the papers have a bearing on the rights of both indigenous peoples and the descendants of European settlers throughout Australia. The papers are also significant as documenting much of the life, experiences and thoughts of Edward Koiki Mabo, a man who was not widely known in his lifetime but whose name is now a household word around Australia. Inscribed on the International Memory of the World Register in 2001. The Memory of the World International Register lists documentary heritage which has been identified by the International Advisory Committee in its meetings in Tashkent (September 1997), in Vienna (June 1999), in Cheongju City (June 2001), in Gdansk (August 2003), in Lijiang (June 2005), and in Pretoria (June 2007) and endorsed by the Director-General of UNESCO as corresponding to the selection criteria for world significance. 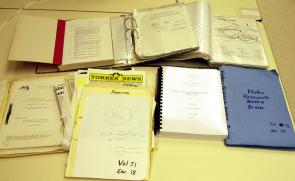