The interviews have been collected or commissioned by the custodial institutions according to the conventions of best practice in oral history. Interviews are recorded with interviewees who have been identified as having the relevant personal experiences and credentials to tell their story. Interviews are generally conducted by subject experts, including historians who have specialised in migration history.

These oral histories illustrate the long history of cultural diversity through immigration. They tell stories of collective experience which are also deeply individual, unique and personal. They tell of trauma and triumph, adversity and adaptation; maintaining traditional cultures and becoming Australian. That interviewees intentionally recorded account of their lives and experiences for long term public access is a testament to their generosity, pride, sense of self-worth, and belief that accounts of their lived experiences merit not only telling, but keeping, for the nation. Their stories help the nation understand immigration and the value immigrants add to life in Australia.

This collection, held by the Estonian Archives in Australia and added to this inscription in 2021, consists of recordings in English and Estonian of the experiences of Estonian migrants to Australia after World War Two, beginning in 1947. They were amongst the first post-war non-British migrants brought to Australia.  With accompanying documents the histories constitute a rich historical resource reflecting early post-war Estonian migration as well as the Australian experiences of the Estonian community. These migrants helped create a more diverse Australia, in contrast to the earlier predominantly Anglo-Celtic, non-Indigenous population mix. 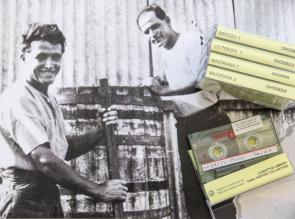