Norman Tindale began working at the South Australian Museum in 1918 as an entomologist's assistant, became its full-time ethnologist in 1928 and retired in 1965 after 45 years at the Museum. His significant contribution to documenting Aboriginal Australia arose from his association with Maroadunei, a Ngandi songmaker from Arnhem Land, who Tindale met on his first expedition to Groote Eylandt from 1921-22. Maroadunei introduced Tindale to the concept of 'tribal boundaries', establishing that Australian Aboriginal people were not 'free wanderers' but were linked by culture, kinship and language and were bound to the land geographically and ecologically. Tindale set out to collect and collate empirical data from numerous expeditions, culminating in his 1974 map of tribal boundaries and its accompanying catalogue, 'Aboriginal tribes of Australia, their terrain, environmental controls, distribution, limits and proper names'.

Tindale recorded observations and data into journals over five decades.  His collection in the South Australian Museum Archives comprises expedition journals and supplementary papers, sound and film recordings, drawings, maps, photographs, genealogies, vocabularies and correspondence. Copies of Tindale’s genealogies are consulted by Indigenous people across Australia, with records on some families dating back to 1860, and sometimes include language groups and people’s traditional names. The genealogies, charted in hand-written field notes, include 50,000 Indigenous people, as well as thousands of named photographic portraits. The Tindale Collection has provided evidence for Native Title claims, and has helped thousands of Aboriginal people to trace their family connections, particularly in areas where traditional knowledge has been lost. 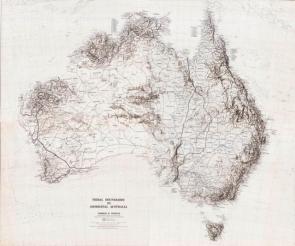