HomeRecords of the Tasmanian Convict Department 1803-1893

Records of the Tasmanian Convict Department 1803-1893

Tasmania was the second primary site for the reception of convicts transported from the British Isles to the Australian continent in the nineteenth century. Convicts formed the first major group of European descent to settle in Tasmania, and formed the bulk of the community throughout the period of transportation. The records held in the Archives Office of Tasmania meticulously document every aspect of the life of each convict in the system, and have provided the basis for research into a wide range of historical topics related to the convict period, as well as genealogical research into family origins. Their survival throughout many years when Tasmanians were more inclined to deny the impact of the convict origins of the state is remarkable. 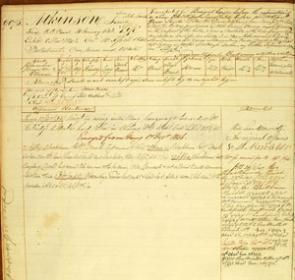 Conduct record for James Atkinson, transported on the John Renwick, arrived 11 April 1843, after escaping after earlier transportation (1829)
More information about this listing is available here; Tasmanian Archive and Heritage Office
This collection is also inscribed on the International Register of the UNESCO Memory of the World