This collection is significant as a comprehensive collection of 4,000 newsreel films and documentaries representing news stories covering all major events in Australian history, sport and entertainment from 1929 to 1975. These films for many years were the only means of audio-visually depicting major events such as wars, elections, floods, bushfires, sporting events and national news, and thus played a vital part in reflecting the nature of Australia over almost half a century. The collection contains the film that won Australia's only Academy Award (Oscar) for a documentary, Damien Parer's footage of wartime New Guinea. Much of what is depicted in the Collection is now regarded as significant as an iconic representation of Australia's twentieth-century history, societal attitudes and changing relationship to the world. The films encapsulate the unique form and narrative style that endeared the newsreel to a broad spectrum of Australians - one that is fondly remembered to this day. 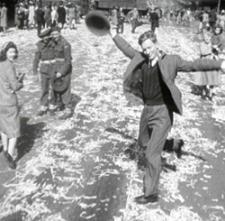 Celebrations after peace is declared in Sydney, 15 August 1945. Courtesy Cinesound-Movietone Productions. [Click the image to view the clip]
More information about this listing is available here; National Film and Sound Archive