The Kelly Papers held by the Public Record Office Victoria are the primary documentary evidence of Ned Kelly's story, and provide detailed factual information on Kelly, his gang members, family and supporters. The hundreds of official Kelly papers at PROV are the largest and most intact collection of historic documents on the subject, and range from the earliest Police reports in the Kelly saga, to the court records of Ned's trial. The Papers, dating from the 1850s to 1882, also document the reform of the Victorian Police Force as a result of the 1881 Royal Commission on the Police Force of Victoria, which was reviewed at the time of the Kelly outbreak. The records provide the material evidence of the life and career of Australia's most notorious outlaw, whose story has achieved iconic status in the Australian imagination. Ned Kelly's story, mostly amply told in these documents, has inspired artists and musicians, historians and novelists, film and documentary makers and cultural tourists. 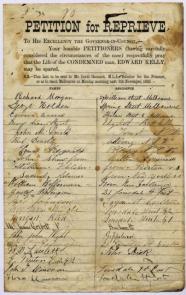 Petition for Reprieve for Ned Kelly