A remarkable achievement in film-making under difficult battlefield conditions, it is the only known moving imagery of the Dardanelles campaign in the Gallipoli Peninsula. Filmed at Imbros Island, ANZAC Cove, Cape Helles and Suvla Bay, it features Australian, New Zealand and British troops in military operations and daily life, as well as showing Turkish prisoners of war and excellent footage of the terrain.

The film shows soldiers in action in frontline trenches using periscope rifles—an Australian innovation—and remarkable scenes of a firefight and Turkish shells exploding in the Allies’ positions. It highlights the logistical challenges faced by the campaign, including scenes of a donkey being lifted over the water from a supply ship to land.

The film has been digitally restored and runs for 20 minutes 2 seconds. 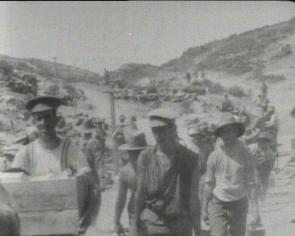 Men of the Australian forces make their way up “Monash Valley”, past the headquarters of Generals Monash and Chauvel.