The Mountford-Sheard Collection holds the wealth of material gathered by self-taught South Australian ethnographer, C. P. Mountford (1890-1976) during a career spanning the 1930s to the 1960s. Included are field notebooks and journals, photographic images, motion pictures, sound recordings, artworks, corresppondence and published works, along with his extensive personal library.

The collection holds items of great cultural significance to many Aboriginal communities in Australia, most particularly those in Central Australia, the Flinders Ranges, Arnhem Land and the Tiwi Islands. A prolific note-taker, Mountford's journals also provided a valuable insight into the practices of 20th century anthropology and ethnography.

The material produced by Mountford, particularly his photography, is significant because it is both respectful and empathetic to the Aboriginal people it depicts. Indeed, Mountford endeavoured to create an awareness of, and respect for, Aboriginal culture which was absent from mainstream Australia at that time. The details with which he recorded artistic, religious and ceremonial life is of ongoing importance to the spiritual life of these communities. 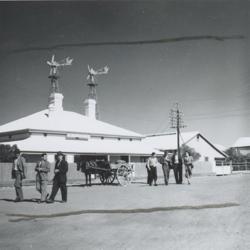