The preserved footage and Centenary reconstruction of the film The Great Strike (1917) provides a unique perspective on union activity in Australia at that time. The strike started on New South Wales’ (NSW) railways and tramways on 2 August 1917. Arthur Charles Tinsdale filmed aspects of the strike as it was unfolding, as well as appropriating footage from locally made newsreels.

The strike occurred during a period of international turmoil – World War I (WWI), the Irish Rebellion of 1916, the Russian Revolutions of 1917 and the conscription debates that divided Australian society. From the strike rose significant personalities such as train driver Ben Chifley, who went on to become Australia’s Prime Minister from 1945-49. The Great Strike is defined by historians as one of Australia’s largest industrial conflicts.

Tinsdale’s hour-long documentary film, which promised to present both sides of the strike, was released in early October 1917 when the strike had largely ended. The Great Strike (1917), as it was originally titled, was screened once in NSW before it was embargoed, censored and retitled Recent Industrial Happenings in New South Wales.

It was thought that only a ten-minute segment from the retitled film, Recent Industrial Happenings in New South Wales, held in the National Film and Sound Archive’s collection, was all that had survived. However, additional negative film footage was discovered in 2016 in the NSFA’s collection. Both fragments were used for the Centenary reconstruction.

Also used to aid in the reconstruction was the synopsis as it appeared in a Strand Pictures, Narrabri, 25 October 1917 advertisement promoting the original film, that was discovered in the censorship file held by NSW State Archives and Records. The reconstruction is 15:30 minutes in duration, comprising all that remains of Tinsdale’s film. 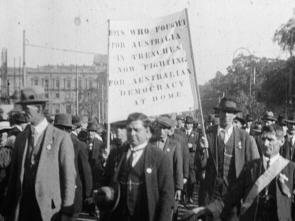