The Ison’s Cinema Slides Collection contains over 400 quarter plate slides of local soldiers shown at the Tamworth Royal Theatre and Ison’s Open Air Theatre in Tamworth during World War I. It includes portraits of servicemen, the majority of them studio photographs taken before embarkation for the front, some copied from photos taken in Egypt before the soldiers travelled to the battlefields, and some taken in the field. So that their stories could be reported to local audiences each soldier is identified with his name written onto the emulsion on the slide, together also with updates of recent news on some – dates of battles, when a soldier was wounded, and later when many of these soldiers were killed in action. Alongside these poignant images are advertisements for war fundraising and recruitment drives, for local businesses, and for coming film attractions – providing a valuable snapshot of the Tamworth region during World War I. The collection is unique in the Australian context in its use of modern communication methods – projecting images of soldiers as part of the cinema-going experience of a local audience – in the drive to obtain more recruits for the Australian Army.

The slides were originally donated to the local RSL by the Ison family but were lost for many years. They were rediscovered in 2003 during renovations to the RSL building. Despite having been stored in a large steel box below the floorboards, the slides were found to be in good condition. The collection was donated by the RSL to the Tamworth Historical Society and is now held by the Tamworth Regional Film and Sound Archive on behalf of the Historical Society. It has been digitised.

The collection is of historical significance as a comprehensive representation of those from the Tamworth region who served in World War I and as an innovative device to both honour their service and to encourage recruiting. Many of the soldiers represented have descendants still living in the Tamworth area. The Archive has been working with local families, schoolchildren and interested researchers to compile bibliographic information on the soldiers. This research project was the joint winner of the Research Category at the Tamworth Heritage Awards in April 2016. 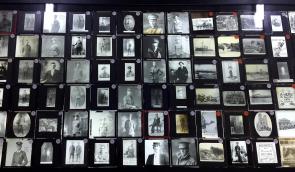 Selection of cinema slides of local recruits from Tamworth in World War I.