Ethel Turner’s Seven Little Australians, first published in 1894, has been in print longer than any other Australian children’s book and was the first to be translated into a foreign language. An instant success, it sold five thousand copies in Australia in its first year of publication, and over two million copies to date. The original 1983 manuscript is the tangible embodiment of Turner’s creative process, which produced one of Australia’s most iconic pieces of literature. It marked a turning point in Australian children’s literature. Seven Little Australians was the first work of family fiction to portray Australian life in an authentically Australian voice, and the first Australian children’s book to feature a girl as the hero, thus contributing to the foundation of girls’ literature in Australia. Turner also broke the mould of Australian writing which had usually reflected British ideas about Australia and Australians, by her evocation of life in the suburbs of Sydney, with the characters enjoying the resources and attractions an established city offered.

Seven Little Australians is regarded as a classic of Australian nineteenth-century literature. Its 182 pages focus on seven siblings growing up in Australia with an authoritarian father and a young and very busy stepmother. One of its many endearing qualities is that, in Turner’s words, the children are “not really good.” She sketched the intricacies of the family unit and included the challenges, joys and misadventures. Readers are able to identify their own childhood experiences and parental failings in what she wrote. Turner provides a contemporary account of late Victorian family discipline, and also of the expression of love in an Australian family.

It should also be noted that the manuscript contains the retelling of a story from an Aboriginal man, Tettawonga. It includes a critical reference to the treatment of Aboriginal people by “the white man.” This story was in the first edition but was omitted in subsequent editions until reinstated in the 1994 centenary edition. The omission of this passage probably reflects majority societal attitudes in preferring not to deal with critical issues related to Indigenous Australians. It is significant that the original manuscript demonstrates Turner’s intention to include a contemporary reference to Aboriginal people and their plight, rather than exclude them from the Australian consciousness. 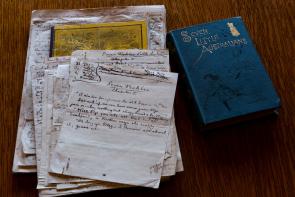