William Buelow Gould’s Sketchbook of Fishes, in the collection of the Allport Library and Museum of Fine Arts, Hobart, was created by this convict artist while he was incarcerated on Sarah Island on Tasmania’s west coast in 1832, at the behest of the resident medical officer, Dr William de Little, to whom Gould was assigned. Gould’s delicate watercolours of fish species include the earliest representation of the world’s largest freshwater crayfish, the genus Astacopsis, which was not described and taxonomically classified until 1845.The Sketchbook offers powerful evidence that artistic and scientific pursuits could flourish in the grim and hostile environment of one of Australia’s most remote and miserable penal settlements. William Buelow Gould’s Sketchbook of Fishes inspired Richard Flanagan’s prize-winning novel, Gould’s Book of Fish. His imaginative treatment of the life of the artist, and the inclusion in the novel of coloured reproductions of fish species from the Gould Sketchbook has brought knowledge and appreciation of Gould’s artistry to a wide audience in Australia and overseas. 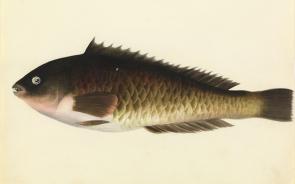